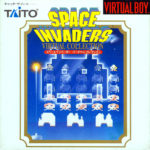 Space Invaders Virtual Collection for the Nintendo Virtual Boy was released only in Japan in December of 1995. This game will work on an American Virtual Boy without any modifications and nearly all in-game text is in English.

Space Invaders Virtual Collection is six games in one. These are sorted into three different categories: Original 2D, Virtual 3D, and Challenge.

Virtual 3D is the real meat and potatoes of the game, it contains updated versions of Space Invaders and Space Invaders Part II. The most significant enhancement is the new perspective. Instead of the traditional bird’s eye view of the field, in Virtual 3D the view is from behind the laser cannon. This makes it seem like the invaders are bearing down on you which heightens the tension and is a nice use of the Virtual Boy’s 3D capabilities. Graphically, some very nice planetary backdrops and starfields have been added, but the invader models are the exact same as the arcade originals. The sound effects are identical to those of the arcade games as well.

Challenge consists of special versions of the 3D games where you only face one wave of invaders. Time Attack is the Virtual 3D version of Space Invaders and Score Attack is the 3D version of Space Invaders Part II. Despite the names, both modes keep track of score and completion time. The only real difference is that in Time Attack you only have one life, while in Score Attack you get three.

All six games play the exact same way. A wave of invaders slowly descends from the top of the screen while you try to shoot them with your laser cannon. You can only fire one shot at a time so accuracy is of the utmost importance. There are four bunkers that you can duck behind to take cover from enemy shots but these are slowly eroded away leaving you exposed to attack. Occasionally a UFO will fly across the top of the screen, you can take it out for bonus points.

Taito did an outstanding job with the controls. They’ve kept it very simple, you move your laser cannon with the left control pad and can use ANY other button to shoot. Movement is very tight, you’ll be dodging enemy blasts and threading your shots with ease. Other developers should take note, these are how controls are supposed to be done.

You are treated to a short little 3D animation of an invader when the game first loads. The title screen contains artwork from the original Space Invaders arcade cabinet, which is a nice nostalgic touch. The 2D games look exactly like their arcade counterparts (and they should). The 3D games are what drags this score down. The detailed planetary backdrops and sparkling starfields in the background provide nice eye candy and are a decent use of 3D. The problem is that the invaders and laser cannon look exactly like they did in 1979! I would love to have seen what the updated models might have looked like. The classic designs seem very cartoony compared to the much more realistic backgrounds.

All of the sound effects in this game are lifted straight from the arcade version. While this is acceptable (and expected) for the 2D games, there should have been some attempt at updating the sounds and music for the 3D games. The explosion effects are scratchy, the lasers sound weak, and the music still sounds like someone spent a lot of time playing Asteroids. Galactic Pinball really showed off the audio capabilities of the Virtual Boy, Space Invaders sounds outdated by comparison.

While the gameplay may seem simple and repetitive to some players, Space Invaders has always been about the challenge. This game is a true test of skill and you will spend hours trying to break your high scores in each of the game’s six modes. The only major downside is that the game lacks a backup battery, so if you want to save your high scores, you’re going to need a pencil.

Space Invaders Virtual Collection was only released in Japan and reportedly only had a production run of 25,000 copies, so this is a very difficult game to find. This game will show up on eBay on occasion, but will often go for well over $200. That being said, if you ever stumble upon a copy at a decent price, don’t pass up this outstanding port of a true arcade classic.

Nearly three decades after taking arcades by storm, the original Space Invaders formula still provides copious amounts of fun and challenge. Taito did an outstanding job of porting these arcade classics to the Virtual Boy, but I wish they had done more “enhancing” in the 3D versions. Still, this is a solid title that is a must play for any fan of the Virtual Boy.