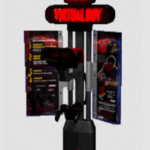 This beautiful “Virtual Boy Display System” was designed by Design Phase for Nintendo and won the “Design of the Times Display of the Year” award in 1996. The displays were supplied to retailers like Toys’R’Us or Wal*Mart nationwide when the Virtual Boy was released in the US. From Design Phase’s website, ca. 2000:

Winner of the 1996 Design of the Times Display of the Year Award. The display allows customers of any age and size to demo the game by adjusting the displays headset to the proper height. The high tech appearance compliments the virtual reality concept of the game and the contemporary graphics explain how to operate it. The lighted logo features an infinity-mirror technique that emphasizes the 3-D quality of the game. Three versions are available to retailers: a floor model, a counter version and a low profile counter.

The Counter Version is mounted on a big, nearly square metal-plate covered in textured rubber. The plate is about 40 x 55 cm big and has 4 holes to mount the unit to a table or something else. The display is about 82.5 cm high and weights nearly 45 pounds.

The ads in the 2 wings on both sides explain what Virtual Boy is and how to operate it. The red lighted logo features an infinity-mirror technique that emphasizes the Virtual Boy’s 3-D quality. This logo was also available as a free-hanging sign with extra hooks.

The VB Display System was also supplied to Japanese retailers. Japanese and American displays are the same, but some Japanese Floor Versions had an additional footplate and they had different sets of ads announcing different games not just one set as in the US.