The agreement with Reflection is a milestone for Nintendo as it marks the first time the video game leader has taken an equity position in a U.S.-based company.

Nintendo has also obtained exclusive worldwide licensing rights within the video game market to Reflection's patented virtual display technology. The initial application of this technology will be Nintendo's "Virtual Boy"(TM), a 32-bit, RISC-based virtual reality system developed for the mass market which will be introduced in Japan and the Western Hemisphere in April of 1995.

"We have made this significant investment in Reflection because we recognize the tremendous market potential for the company's unique technology," stated Nintendo Co. Ltd President Hiroshi Yamauchi. "In addition, our licensing agreement with Reflection will make Nintendo the only video game manufacturer with access to its unique technology."

Reflection was founded in 1987 by a team of scientists from MIT with the mission to exploit a breakthrough in LED (light emitting diode) technology. The resulting designs and products carry multiple worldwide patents, have been extensively tested and can be manufactured for the mass market.

Reflection's virtual displays are miniature in scale, but appear full-size when held near the eye. By combining two of these LED displays together in one processing unit, the stereoscopic Virtual Boy produces 3-D graphics previously only available in advanced simulation systems costing thousands of dollars. Players will now experience full depth perception and complete rotational movement for the cost of a traditional video game system.

"We are very excited to be working with the worldwide leader in the home video game industry," commented Al Becker, president of Reflection. "Our brain-trust at Reflection has been working on this technology for a number of years and this exclusive worldwide licensing arrangement with Nintendo will place our technology into the hands of millions of consumers."

"The cutting-edge technology developed by Reflection Technology has multiple future applications in the real world, such as telecommunications," said Nicholas Negroponte, who is director of the media laboratory at MIT and an investor in Reflection. "Utilizing this technology, Nintendo's Virtual Boy will provide video game players with a truly unique experience."

Reflection Technology Inc. is a world leader in virtual display technology and mobile messaging. Reflection develops and markets virtual displays and products that incorporate these displays. Reflection's patented Scanned Linear Array (SLA) displays are being used in a new generation of products that are expanding the horizon of the telecommunications and consumer electronics markets.

Nintendo Co. Ltd. of Kyoto, Japan, is the leader in the worldwide $15 billion retail video game industry. As a wholly owned subsidiary, Nintendo of America Inc., based in Redmond, Wash., serves as headquarters for Nintendo's operations in the Western Hemisphere where more than 40 percent of American homes own a Nintendo system. -0-

Virtual Boy is a trademark of Nintendo. 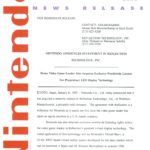 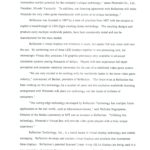 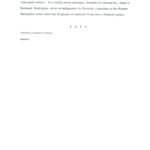