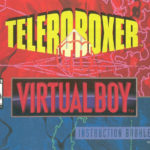 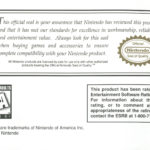 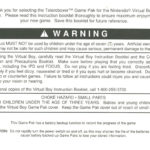 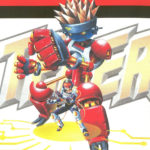 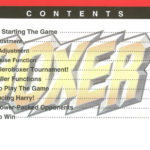 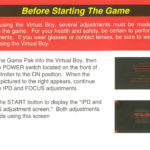 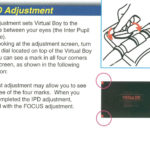 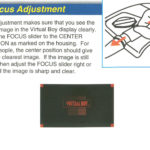 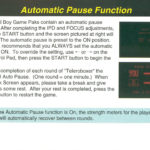 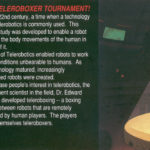 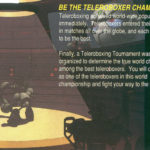 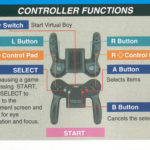 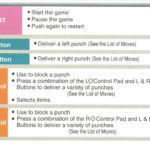 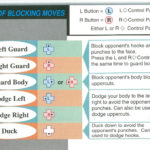 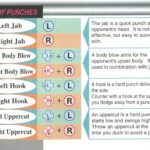 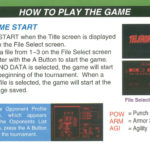 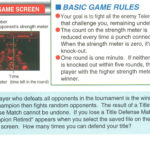 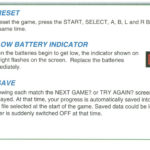 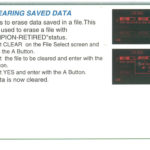 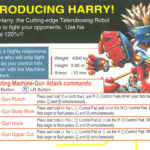 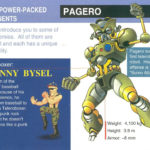 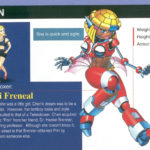 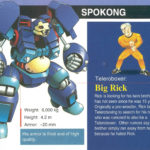 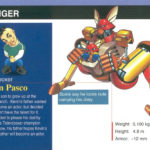 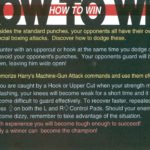 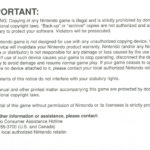 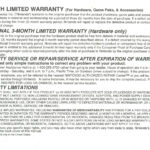 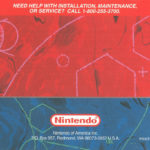 Transcript
Seal Of Quality This official seal is our assurance that Nintendo has reviewed this product and that it has met our standards for excellence in workmanship, reliability and entertainment value. Always look for this seal when buying games and accessories to ensure complete compatibility with your Nintendo product. All Nintendo products are licensed by sale for use only with other authorized products bearing the Official Nintendo Seal of Quality(TM). KIDS read more…

This official seal is our assurance that Nintendo has reviewed this product and
that it has met our standards for excellence in workmanship, reliability and
entertainment value. Always look for this seal when buying games and accessories
to ensure complete compatibility with your Nintendo product.

All Nintendo products are licensed by sale for use only with other authorized
products bearing the Official Nintendo Seal of Quality(TM).

This product has been rated by the Entertainment Software Rating Board. For
information about the ESRB rating, or to comment about the appropriateness of the
rating, please contact the ESRB at 1-800-771-3772.

Thank you for selecting the Teleroboxer(TM) Game Pak for the Nintendo(R)
Virtual Boy(TM) System. Please read the instruction booklet thoroughly to
ensure maximum enjoyment of your new game. Save this booklet for future
reference.

/!\ WARNING
¯¯¯
This product MUST NOT be used by children under the age of seven (7) years.
Artificial stereo vision displays may not be safe for such children and may
cause serious, permanent damage to their vision.

Before using the Virtual Boy, carefully reed the Virtual Boy Instruction
Booklet and the Consumer Information and Precautions Booklet. Make sure
before playing that you correctly adjust the hardware, including the IPD
and FOCUS. Do not play if you are feeling tired. Discontinue use immediately
if you feel dizzy, nauseated or tired or if you eyes hurt or become
strained. Do not use unlicensed or counterfeit games. Failure to follow
all instructions could injure you and cause serious damage to your vision
or hearing.

CHOKE HAZARD - SMALL PARTS
NOT FOR CHILDREN UNDER THE AGE OF THREE YEARS. Babies and young children could
choke on the Virtual Boy Game Pak cover. Keep the Game Pak cover out of reach
of small children.

This Game Pak has a battery backup function to record the
progress of the game.

CAUTION: Do not rapidly turn the power switch on and off, as this
may shorten the life of the batteries and cause battery backed-up
Game Paks to lose your stored information.

BEFORE STARTING THE GAME

When using the Virtual Boy, several adjustments must be made before stating the
game. For your health and safety,be certain to perform these adjustments. If
you wear glasses or contact lenses, be sure to wear them while using the
Virtual Boy.

Insert the Game Pak into the Virtual Boy, then turn the POWER switch located
on the front of the controller to the ON position. When "IMPORTANT READ
INSTRUCTION AND PRECAUTION BOOKLETS BEFORE OPERATING" appears on screen,
continue with the IPD and FOCUS adjustments. Press the startbutton to display
the "IPD and FOCUS adjustment screen." Both adjustments are made using this
screen.

This adjustment sets Virtual Boy to the distance between your eyes (the Inter
Pupil Distance). While looking at the adjustment screen, turn the IPD dial
located on top of the Virtual Boy until you can see a mark in all 4 corners of
the screen. The best adjustment may allow you to see only 3 of the 4 marks.
When you have completed the IPD adjustment, proceed with the FOCUS adjustment.

This adjustment makes sure that you see the game image in the Virtual Boy
display clearly.Move the FOCUS slider to the CENTER POSITION as marked on the
housing. For most people, the center position should give you the clearest
image. If the image is still fuzzy, then adjust the FOCUS slider right or left
until the image is sharp and clear.

After the completion of each round of "Teleroboxer" the game will Auto Pause
(One round=One Minute.) When the Break Screen appears, please take a break and
give your eyes some rest. After your rest is completed, press the start button
to restart the game. When the Automatic Pause function is On, the strength
meters for the player and enemy will automatically recover between rounds.

It is the 22nd century, a time when a technology called telerobotics is
commonly used. This area of study was developed to enable a robot to mirror the
body movements of the human in control of it.

The use of Telerobotics enabled robots to work under conditions unbearable to
humans. As the technology matured, increasingly specialized robots were
created. To increase people's interest in telerobotics, the pre-eminent
scientist in the field, Dr. Edward Maki Jr., developed teleroboxing -- a boxing
match between robots that are remotely controlled by human players. The players
called themselves teleroboxers.

Teleroboxing achieved world-wide popularity immediately. Teleroboxers entered
their robots in matches all over the globe, and each claimed to be the best.
Finally, a Teleroboxing tournament was organized to determine the true world
champion among the best teleroboxers. You will compete as one of the
teleroboxers in this world championship and fight your way to the top.

SELECT
After pausing a game by pressing START, press SELECT to witch to the adjustment
screen and adjust for eye separation and focus.

B BUTTON
Cancels the selected item

The jab is a quick punch at the opponent's head. It is not very effective, but
easy to score hits with.

HOW TO PLAY THE GAME

On the opponent Profile screen, which appears after the Opponents List Screen,
press the A Button to start the tournament.

The player who defeats all opponents in the tournament is the winner. The
champion then fights random opponents. The result of a Title Defense Match
Cannot Be undone. If you lose a Title Defense Match, "Champion Retired" appears
when you select the saved file on the File Select screen. How many times can
you defend your title?

RESET
To reset the game, press the START, SELECT, A, B, L and R Buttons at the same
time.

LOW BATTERY INDICATOR
When the batteries begin to get low, the indicator shown on the right flashes
on the screen. Replace the batteries immediately.

SAVE
Following each match the NEXT GAME? or TRY AGAIN? screen will be displayed. At
that time, your progress is automatically saved into the data file selected at
the start of the game. Saved data could be lost if the power is suddenly
switched OFF at that time.

This is Harry, the Cutting-edge Teleroboxing Robot you use to fight your
opponents. Use his potential 120%!!!

Harry is a highly responsive machine who will only fight as well as you
control him. Pour it on with his Machine-Gun Attack.

Machine-Gun Punch
Press and hold up on both the L and R Control Pads. When your fists begin to
flash, press L & R Buttons simultaneously.

Machine-Gun Body Blow
Press and hold right on the L Control Pad and left on the R Control Pad. When
your fists begin to flash, press L & R buttons simultaneously.

Machine-Gun Hook
Press and hold left on the L Control Pad or right on the R Control Pad. When
your fists begin to flash, press L & R Buttons simultaneously.

Machine-gun Upper Cut
Press and hold down on the L Control Pad or R Control Pad. When your fists
begin to flash, press the L & R buttons simultaneously.

YOUR POWER-PACKED OPPONENTS
Now to introduce you to some of your enemies. All of them are powerful and each
has a unique personality.

Pagero was the first teleroboxing robot. His favorite offense is his: "Sumo
Attack".

Teleroboxer:
JOHNNY BYSEL
Ex-captain of the "Cookies" baseball team. Because of his love of violence, he
retired from baseball to become a Teleroboxer. He loves punk rock music, but
he doesn't like to dress like a punk rocker.

She is quick and agile.

Teleroboxer:
Cheri Freneal
Ever since she was a little girl, Cheri's dream was to be a fashion model.
However, her tomboy looks and style were more suited to that of a teleroboxer.
Cheri acquired her machine "Prin" from her friend, Dr. Heckel Brenner, an
engineering professor. Although she doesn't know it, word on the street is
that Brenner obtained Prin by stealing it from someone else.

His armor is thick and of high quality.

Teleroboxer:
Big Rick
Rick is looking for his twin brother that he has not seen since he was 15 years
old. Originally a pro-wrestler, Rick began Teleroboxing to search for his
brother who was rumored to also be a Teleroboxer. Other rumors say that his
brother simply ran away from home because he hated Rick.

Some say he looks cute carrying his Joey.

Teleroboxer:
Kevin Pasco
The eldest son to grow up at the "Pasco" Ranch. Kevin's father wanted him to
become an actor, but decided he didn't have the talent for it. Kevin decided
to please his dad by becoming a Teleroboxer champion instead. Now, his father
hopes Kevin's younger brother will become an actor.

*Besides the standard punches, your opponents all have their own special boxing
attacks. Discover how to dodge these.

*Counter with an uppercut or hook at the same time you dodge or duck to avoid
your opponent's punches. Your opponents guard will be down, leaving him wide
open!

*Memorize Harry's Machine-Gun Attack commands and use them effectively.

*If you are caught by a Hook or Upper Cut when your strength meter is flashing,
your knees will become weak for a short time and it will become difficult to
guard effectively. To recover faster, repeatedly press Up on both the L & R
Control Pad. Should your enemy become dizzy, remember to take advantage of the
situation.

*With experience you will become tough enough to succeed! Only a winner can
become the champion!

WARNING: Copying of any Nintendo came is illegal and is strictly prohibited by
domestic and international copyright laws. "Back-up" or "archival" copies are
not authorized and are not necessary to protect your software. Violators will
be prosecuted.

This Nintendo game is not designed for use with any unauthorized copying
device. Use of any such device will invalidate your Nintendo product warranty.
Nintendo (and/or any Nintendo licensee or distributor) is not responsible for
any damage or loss caused by the use of any such device. If use of such device
causes your game to stop operating, disconnect the device carefully to avoid
damage and resume normal game play. If your game ceases to operate and you
have no device attached to it, please contact your local authorized Nintendo
retailer.

The contents of this notice do not interfere with your statutory rights.

This manual and other printed matter accompanying this game are protected by
domestic and international copyright laws.

The rental of this game without permission of Nintendo or its licensees is
strictly prohibited.