Benjamin Stevens has done complete scans of Nintendo’s 1995 and 1996 Annual Report Booklets. While the 1995 one contains about a dozen pages about the Virtual Boy, including a bunch of nice images, the latter has only a single sentence about it (page 31).

Sales of the Company’s Virtual Boy system did not meet expectations. 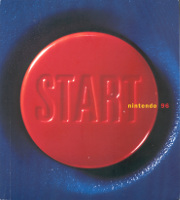 … not really – thank You for sharing

when I first read the ’96 report I was expecting to find something about the re-launch of the Virtual Boy, but nope, just that one sentence.

Since there are no Virtual Boy sales numbers, doesn’t that imply that Nintendo discontinued it during the 1995 fiscal year (before March 31, 1996)?

Yeah, I suppose Nintendo Power comments could count as official. Nevertheless, it is hard to tell exactly when the Nintendo ’96 Report was issued. Page 43 mentions June 27, 1996 as if it was a date already somewhat far in the past at that point. Plus, it seems that Dragon Hopper and Zero Racers were already fully considered to be scrapped at the time the ’96 report was issued, or else there probably would have been hopeful mention of them earlier in the book with the upcoming products.

It sold nearly a million units in a year (or less). And that’s just in North America and Japan (I believe). If they would have supported the virtual boy for longer, it could have done a lot better. Maybe they were losing money on it? Ah, what could have been 🙁