Howdy there, would you like some dinosaur on your Virtual Boy?

StereoBoy has released a brand new homebrew he has been working on recently with Jorgeche and me. “DaumenKinosaurier – VUEdition” is a Virtual Boy port of an awarded stereoscopic flip book StereoBoy made as a student in 2009, realized in the VUEngine.

More information about the project, ROM download as well as sources can be be found in the release thread. 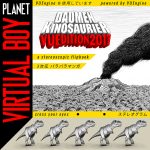