We're using cookies to ensure you get the best experience on our website. More info
Understood
Home »Forums »Offtopic »

Here is the story, I have a co-worker who has an original NES with some accessories and approached me a long time ago to see if I could help him figure out what it all was worth. The system and games weren’t too hard to appraise, but he did have something I’ve never seen before, a stand for his NES system. I have been desperately trying to find out anything about this accessory since then. I’ve googled, I’ve blogged, I’ve wikied, I’ve been on multiple forums, and browsed dozens of Nintendo fansite archives. Nothing.

Here’s the item: It’s a wooden stand that easily fits the NES (1st gen) system, the front part with Mario and Nintendo on it is a door that opens up to a nice little compartment with holding slots for cartridges. (sorry no picture of inside)

There isn’t anything written on the unit except for “Made in Canada Model # B807279”. It was purchased at the same time with a new NES system in a department store in 1988 or 1989.

I’ve been looking for any kind of info for two years now, and finally found something. While watching an AVGN video the other day, I noticed him show two images from some sort of advertisement for Nintendo merchandise as part of an intro to his review. I have no idea if these came from a magazine, flier, insert, etc. There are two stands in these ads that are similar to the one I’ve been desperately researching.

I’m hoping someone here can offer up something, I know it’s a long-shot. Any comments or suggestions on good sources to go to would be welcome.

I’ve heard of these, the magazine AVGN was showing them from would probably be a Nintendo Power magazine showing official nintendo merchandise, i have no idea what its called, it looks pretty cool though !

AVGN actually owns one, you can see it in a few of his videos, in one of his latest ones (Bugs bunny’s crazy castle) episode at around 9:40 and 12:22 in the episode you see it and they get real close to the nintendo storage cupboard for the NES (i dunno what its called lol)

hope it helps, id say its a uncommon item, not sure if its rare but it would be hard to obtain one due to its size and being uncommon and all. I’d certainly like one!

Thanks for the help Matthew, you’re right. That exact thing is in AVGN’s collection, I watched the Bugs Bunny video and there it was. I’m trying to get ahold of him, but he is apparantly horrible at getting back to people who try to contact him through his site. So I may still be on my own on this search.

I can’t really help with your search, but I think I knew someone who owned one of those two kinds of organizers. It was about 18 yrs. ago, though, and I only saw it for maybe an hour or two (and most of that time I was playing NES, of course :-P) so it could have been an entirely different thing/brand.

As a side note, though: If there are any actual kids like those depicted in the magazine ads, they officially qualify as Nintendo fanboys/fangirls 😀

Thanks a lot guys. I gave up searching ebay a long time ago, especially when I never found anything online. A huge thank you to KRI55E for the link. I feel a little better about my lack of success at researching this after reading the descriptions of these two items, it seems these sellers had a pretty difficult time figuring out how valuable it was too.

@runnerpack – I agree, those kids would definitely be the biggest Nintendorks out there.

@hedgetrimmer – I’ve never seen Mario styled like that before, I hope Nintendo didn’t pay the artist too much. Maybe they realized their mistake, you don’t see anything Mario from the 90’s looking that way.

Like I said originally, I’ve been on other forums and looked for help. I’ve never gotten anything but repeated comments saying “it looks homemade” and “those are clearly stickers”. It just goes to show that the members here are a different class of retro gamers. Just another reason for me to love this site!

Speaking of weird Mario designs, one of my friends has this creepy looking plastic Mario doll, and he’s not wearing a hat. The thing is officially licensed too, which makes me wonder why Nintendo tried so many different styles. 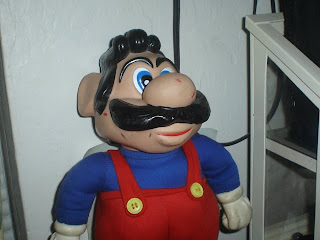 Fwow13 wrote:
Thanks for the help Matthew, you’re right. That exact thing is in AVGN’s collection, I watched the Bugs Bunny video and there it was. I’m trying to get ahold of him, but he is apparantly horrible at getting back to people who try to contact him through his site. So I may still be on my own on this search.

OMG, the guy at the right with the guitar and the hat seems to be an old friend of mine from school! He lives in Canada nowadays. Do you know if the pic was taken there?

The guy with the guitar is Kyle Justin: http://kylejustinmusic.com/

dasi wrote:
The guy with the guitar is Kyle Justin: http://kylejustinmusic.com/