As I’ve mentioned before I created a number of tools to realize the creation of Snatcher. Some are more generic then others. Here’s what might be interesting to others:

1. The Music Engine + Converter
Wav files can be played on the virtual boy. This was done before and is actually rather simple. The converter and player do support a very basic compression to reduce the rom size.

2. The Dialog Engine + Level Generator
I wrote a tool (it’s called DialogSnatcher) that goes through the Snatcher dialog trees and stores them to a xml format. The tool has a UI and allows me to edit what has been extracted. I could go ahead and make this more generic so everyone can make his own adventure game.

3. The 2D to 3D image converter
A tool that allows the generation of stereoscopic images through the usage of depth maps.

4.Shooting Game Engine + Generator
A tool that allows the generation of shooting games as used in Snatcher. It doesn’t have a UI right now but I could add one.

If you want to use any of these to make a game in the near future just write a post. Be aware that it cost be a reasonable amount of time to make these available as all of the tools are rather Snatcher specific right now.

I will eventually release everything anyway. So if no one replies all of this will be released at some point in the future.

Wyndcrosser wrote:
Any chance if these tools being released? I’d love to look into making my own game lol.

Just wanted to let everyone know that I’m on this. There were some requests for this so I’m doing this instead of Snatcher right now.

I already did put together a simple tool that lets you create stereoscopic images using depthmaps. I based it on the code I use for Snatcher but had to rewrite most of it. The only important part missing is the actual exporting, everything else is there. It will take some more time for this to release though.

Wow, can’t wait to try this tool! Very interested in how it fills the voids left by the parallax shifting.

Hello,
I’m a noob, so forgive my ignorance but I was just wondering, if Snatcher for the Virtual Boy is available or will become available someday? It looks AWESOME to me. Cheers!

I believe this is what you’re looking for.

Sorry to resurrect such an old topic, but were these tools ever completed/released? I would very much love to recreate the joy of some old point and click adventure games on the system.

I’ve been mapping out a specific concept off and on for a few years, and I’d really like to make something happen on this platform if at all possible. 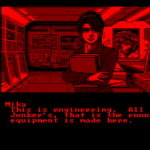 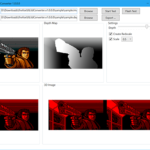