The elusive Dragon Hopper VidPro card has been found

In the nineties, Canadian company VidPro made game retail displays that were used at a number of retailers, most notably Toys’R’Us. The system was simple: instead of the actual game boxes, VidPro displays had cards showing the boxart for every title the store sold, which the customer could browse. If they wanted to make a purchase, they grabbed a slip of paper and brought it up to the cashier to receive the actual game.

Due to VidPro cards being produced prior to a game’s retail release, there were also cards made for unreleased games in rare occasions. It has been known for a long time that a card exists for the unreleased Dragon Hopper, and we have even had super-low res scans which were found in 2002 on half.com.

Now the elusive gem has finally been found by vuefinder83! Enjoy high-res scans of the VidPro cards for Dragon Hopper and a few other Virtual Boy games, including early versions, here. 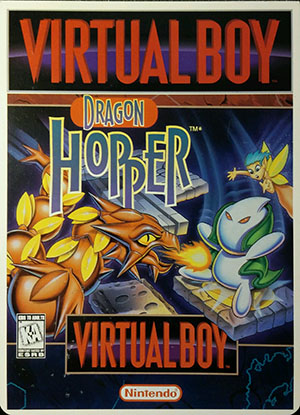 Ridiculously cool find vuefinder83, i’m sure bigmak is happy too.

Thanks dude! Though I wouldn’t know if bigmak is happy or not. I’ve been a member on this site for a little over 2 years now, posting what I thought would’ve been some pretty interesting stuff to him and all Virtual Boy collectors and enthusiasts alike, but you won’t find him in a single one of my threads

But if he’s happy, then I’m happy too!

this is pretty cool. thanks for sharing!

One day we will find a copy of dragon hopper! One day!