Yan’s World, a cute, Virtual Boy style platform game starring a pillow-throwing onion, has been in development for PC for a few years by Heraga (aka Nin) and his team. A Patreon campaign has just been started to fund the further development of the game, including a port to the actual Virtual Boy.

If they’re getting patreons with monthly payments coming in I’d guess they’re in no hurry to finish it – money will keep coming in… Like having a carpenter over for a job on hourly rate instead of one payment when job is done.

@e5frog That is untrue. We started using Patreon due to the stigma associated with running a kickstarter/indiegogo campaign. We want to get this project done as quickly as possible, but without funding that cannot occur.

@Lesser Knight the game’s main development has been on PC. The game itself has been optimized and designed to run on a VB, and the tools we make will also eventually get released as well to make game making easier.

The game will get released publicly, and we have made plans to actually make a limited run series of actual physical boxes and roms so you don’t need a FlashBoy. This physical version will also come with a brand new 90s-styled boxart in both US and JP variants. (Both are already done.)

So the backers of the $5 and up tier will get a physical release?

@Speedyink when the game is released you’ll have the choice of which version you want to buy, but backers do get first dibs on the physical release!

Awesome, thanks for clearing it up

My asking about the FB was more an inquiry about the ROM size. Will it be 2MB or less and fit on a FB or will your custom limited cart release be the only way to enjoy the game on hardware?

@Lester Knight We will try to fit the game on a 2MB rom, but considering the amount of the art in the game we are unsure if that will be possible. Regardless, the game will be heavily tested on both hardware and emulator to provide a very good experience regardless of which version you use and choose.

Do you have an estimated date of completion for the Patreon campaign?

The cost we had in mind for it was roughly $15 or so. These will all be CIB but cart only is being considered. 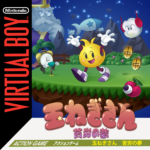