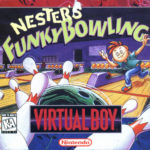 One of two Virtual Boy bowling sims, this one stands out from its Japanese counterpart by virtue of featuring Nester, the unlikely antagonist of Nintendo Power's "Howard & Nester" comics. And his twin sister Hester, whose existence had never been mentioned prior to this game. Which shipped a couple of years after Nester's comic had been canceled. What a strange and inexplicable game.

Bookmarks
No bookmarks available for this video.