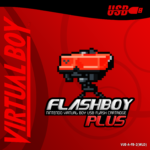 The FlashBoy was the first ever commercially available inofficial Nintendo Virtual Boy flash cart. It’s a mini USB port equipped Virtual Boy cartridge with 16 MBit of internal flash memory, which can hold one game at a time. To load a game to the FlashBoy, you connect it to the PC using a mini USB cable and write the game to the cart using the supplied loader software.

There have been two major versions: the original FlashBoy, which did not have any save support, and the FlashBoy Plus, which came with 8 KB of SRAM.

Development on the cartridge started in August 2006 on the basis of Richard’s Vectrex flash cartridge, VecFlash. Between 2007 and 2010, ca. 285 units of the original FlashBoy as well as 50 units of FlashBoy Plus have been sold through Planet Virtual Boy in a total of 8 batches, complete in numbered boxes. From that point, Richard continued selling them on demand, one at a time. The cart was slightly renamed to “FlashBoy+” and sold cartridge only in varying 3D printed shells.

The FlashBoy line was discontinued around mid-2019, then rebooted by Vintex64 in July 2022 in a slightly enhanced version made out of 100% new, injection molded parts.