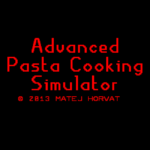 It is sort of an adventure game in which your goal is to cook pasta while having to avoid attacks of your terrorist neighbors. From the game’s website:

The goal of this game is simple: just cook pasta. But be very careful: your neighbors are terrorists and they want to make sure you don’t get to taste any of it. Can you cook yourself lunch while they shoot at you through the windows?