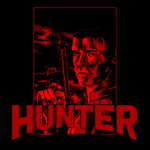 “Hunter” is an unfinished remake of the Atari ST/Amiga game of the same name. It’s a third person 3D action adventure in a large open world made by filled polygons. You can ride dozens of different vehicles and blow lots of stuff up. In the released version you can walk, swim, ride cars and boats and use bombs to blow up all buildings.

“Hunter” was made for PVB Coding Competition 2010 and, unsurprisingly, won first place by a large margin.