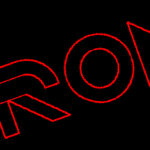 Concerning its development time, the story of Alberto Covarrubias’ Virtual Boy version of the game „Tron“ from the correspondent movie is quite a longish one. After the game was originally announced as a sample for Alberto’s unreleased documentation about the Affine mode during the release of the Virtual-E C Compilers (VECC) in October 2000, it become quiet around it and the game seemed to be cancelled. Almost 8 long years later, Alberto surprisingly and unexpectedly released the finished game in May 2008. At this point it was kind of a little milestone, since it was the first ever released homebrew to fully incorporate sound. The game inspired with a lot of cool Affine effects and later became fourth in the PVB Coding Competition.