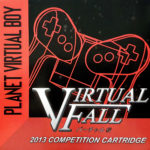 Planet Virtual Boy held a coding competition in Fall and Winter of 2013, called “Virtual Fall“, where the main prize would be a “limited complete-in-box production run” of the winning game. Since the eventual winning entry, M.K.’s Game Boy Emulator, wasn’t well suited for a physical release at all, plans were changed, and a multicart including (almost) all competition entries was secretly prepared and sent out to contestants as a surprise gift. Approximately 15 copies exist in total.

The following 6 games are included, selectable through an in-game menu: