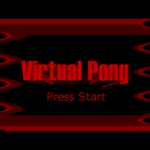 When homebrew programmer Alberto Covarrubias released his homemade game called “Virtual Pong” on the Virtual-E Project homepage in June of 1999, it was the first and for nearly four years the only homebrewn Virtual Boy game. The game is not much more than a simple Pong game, your goal is to get the ball past your opponent to the right border and get points this way. The game offers a single mode and level and you play against a CPU opponent, which only goes up and down the screen and randomly hits the ball if he is in the right spot by accident.