We're using cookies to ensure you get the best experience on our website. More info
Understood
Home »Database »Image Albums »

Sign that was set up in a Walmart store some time in early 1996. 11 of the 14 total Virtual Boy games released in North America are advertised on the sign, the missing titles being Virtual League Baseball, Jack Bros., and Waterworld. This is likely because these three games were not published by Nintendo, whereas the 11 titles that appear on the sign were. 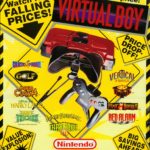