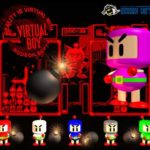 Virtual Boy Panic Bomber Pop Art made by artists of the (ART)n laboratory together with Hudson Soft and Nintendo. The artwork is titled “Panic Bomberman” and is a so called PHSCologram (PHSC means Photography, Holography, Sculpture and Computer Graphics), which could be described as a full-color high resolution hologram.

By taking several computer images or photos, modifying and combining them together via a special patented progress, a PHSCologram is created, which offers great 3D- and depth-effects to the viewer without using any glasses or anything. Though it requires rear-lighting and must be displayed in a lightbox with white fluorescent bulbs, which costs about $500 in the US.

We talked to Stephan Meyers, one of the artists and got some interesting information:

“[…] I was quite pleased with the 3D effect. We pushed Nintendo until they provided us with two actual screen dumps from the Virtual Boy (left and right frames) – they kept saying it wasn’t possible to do that. Those can be seen in the image, though most of the 3D effect comes from the Bomberman models, which were done in alias. The computer model actually had bendable, posable arms, though that has no effect on the PHSCologram, and the sparks on the fuses of the bombs twinkle a little bit as you walk by. What can I say about the depth, it was quite nice, and like all PHSColograms, appears to be a solid 3D object without wearing any glasses or anything on your face. […]”

The piece was shown at E3 in 1995 for the launch of the Virtual Boy system. Hudson Soft owns one copy of this rare piece, at least one is at (ART)n and Nintendo may have another one. But if you’re now dreaming of owning one, forget it… the PHSColograms are meant for serious art collectors and cost $2,500 plus the lightbox, which is another $500!

For more information about (ART)n visit their website at www.artn.com, Stephan Meyers’ homepage can be reached at www.stephan.com.