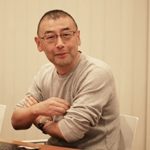 Matsuoka was born in Kyoto, Japan in 1961. Outside of painting, Matsuoka admits he is an easy going fellow without many hobbies. After graduating the Kyoto University of Arts, he officially joined Nintendo in 1984, initially working as a Graphic Artist for the Research & Development 1 Division.