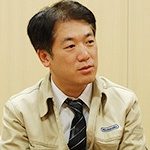 Sugino is a native resident of Japan. After graduating from the Osaka University of Arts, he officially joined Nintendo in 1989, initially working as a Graphic Artist for the Research & Development 1 Division.