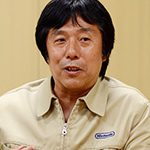 Osawa was born in Kyoto, Japan in 1962. Osawa is a fan of soccer, and music appreciation. After graduating from the Kyoto Seika University, he officially joined Nintendo in 1985, initially working as a Graphic Artist for the Research & Development 1 Division.

Osawa’s first game was Kid Icarus, on which he worked on most of the game himself, until other members of the Metroid team were able to join in. Sakamoto and Osawa would both share the spotlight as the lead game designers of their department, and worked together on several adventure and RPG games including Famicom Tantei Club and Super Metroid. Osawa is all well regarded for his director role on The Legend of Zelda: Ocarina of Time. Most recently, his works include producing the Fatal Frame series that Nintendo became involved with – despite the series having been previously established externally.