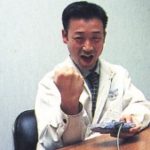 Inoue was born in Hikone, Japan in 1969. His favorite television series is Space Battleship Yamamoto, and his favorite sport is soccer. After graduating from the Kyoto Seika University, he officially joined Nintendo in 1994, initially working as a Graphic Artist for the Research & Development 1 Division.

Inoue’s first project at the company, was contributing to design on Metroid II: Return of Samus. He also played the lead role on designing the pilot characters in F-Zero: Maximum Velocity. The majority of his contributions however, are mainly designing logos, manual and artwork for a variety of Nintendo games.