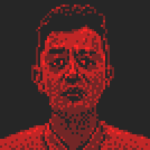 Sakamoto is originally from Nara, Japan. After graduating from the Osaka University of Arts, he officially joined Nintendo in 1982, initially working as a Graphic Artist for the Research & Development 1 Division.

His first prize work was designing early Game & Watch software, which quickly shifted to designing Famicom titles. Since then, Sakamoto has worked on an eclectic and varied catalog of software that never fails to surprise his audience.

Sakamoto was born in Nara, Japan in 1959. Sakamoto’s hobbies include reading, music appreciation, and video editing. Sakamoto was drawn to Nintendo because of his love for their toys and gadgets. Sakamoto began his career at the company designing pixel art for Game & Watch. Sakamoto emerged as an auteur on the Nintendo Entertainment System, as lead designer on titles like Wrecking Crew, Balloon Fight and Gumshoe. On the advice of his boss Gunpei Yokoi, Sakamoto began injecting deeper story-lines into a unique catalog of games that unfortunately were never released outside Japan. Sakamoto’s most famous work revolves around the Metroid series. While he joined the original team during mid-development, Sakamoto was pivotal in redesigning the map and shifting the mechanics from straight forward action to item based exploration. Most recently, his responsibilities have been producing several series including WarioWare, Rhythm Tengoku, and Miitomo.