I hereby release a demo version of my current homebrew project BLOX 2. Since changing to the latest gccVB version about 2 months ago, the game refused to run on hardware and I hadn’t touched it since then. So I think it’s a good idea to share the last build from before the change in form of a demo version. Features of the demo:

The save option is fully implemented, but cannot really be used yet since the FlashBoy has no save support and the save game implementation in Reality Boy seems to be faulty, since it only initializes the first half of the save RAM on startup.
One more feature planned for the final release is full sound support.

I am looking for an artist to help me improving in-game graphics and to create a title screen and artworks for a possible release on cartridge, a sound artist to create in-game sounds and background music as well as translators to any other languages.

Any feedback about the demo is appreciated and will help to release a polished final version. 🙂

Sweet – I’d be happy to try out this demo but I don’t have a Flashboy yet. I will give it a try via emulator… 😎

Congratulations Krisse!… as always, I’m impressed by how well it runs on HW… would love to see the code :-).

Wow! That is really impressive! I especially love the cool sliding menu system.

I played a couple of the Multiblox levels… Is this the first game to include the idea of multiple “pushers” in one room? (Other than “Clone” which is more of a Lolo than a Sokoban…)

The graphics are fine for this style of game, but there are so many ways you could go, I can’t wait to see how you upgrade them. I vote for isometric (yeah, right! ;-))

this is not the first game to have multiple pushers, those have been around before, called multiban levels, there are even some with a dozen pushers. sadly, the levels included in the multiblox are actually ALL two player levels ever created, plus some created or modified by myself.

i don’t want to completely change the way the graphics work, btw. 😉 i just think that the ‘pushers’ need some non flat, stereoscopic graphics, but i have yet been unable to create something goodlooking myself… 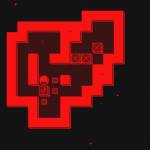