Today, a new homebrew game in development for the Nintendo Virtual Boy has been unveiled… and what an amazing one it is!

“Hyper Fighting” is a fighting game developed by “Mr. Anon” and based on a fighting engine made by yours truly, M.K., creator of VB Racing. It is a clone of a well-known fighting game, and, what else could I say, this thing is absolutely impressive! Great music and sound effects, crystal-clear speech samples, amazing 3D stages, flawless controls and perfect overall polish. If the name Nintendo stood on this, I would not doubt for a second that this was a commercial game created by the big N!

A demo version has been released and the full version of Hyper Fighting is said to be released soon. In the demo you battle 4 different fighters in 4 different stages. Press Start and you’ll be able to change the background music, 3D depth and brightness.

You can download and discuss the demo in the Hyper Fighting release thread.

I’ll say no more and let you check it out for yourself. This doesn’t seem to work on emulators, but if you’re one of the lucky FlashBoy owners, wait no second to flash this beast! Round 1… FIGHT!

Absolutely amazing…I didnt’ think this could be done on the vboy. :thumpup:

I saw some footage on youtube and it looks incredible! I wish my VB was in working order so I could try this out. I was blown away by the sound quality. The sprites look lovely too! 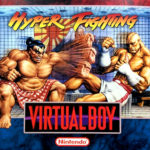