HorvatM has released version 1.1 of his homebrew Shoot’Em Up “Soviet Union 2011“. This release fixes the game to work better on hardware. It also fixes some gameplay bugs and adds new features.

Detailed information about the game come bundled with the ROM. If you get a good score, be sure to submit it to the newly added highscore tables for the game! 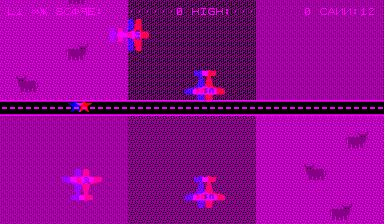 The details in this piece of news are very good, enough to get me excited to play this game.

Thanks, HorvatM, for all your work on the homebrew scene.

the collision detection has me a bit frustrated while playing. it is clear to me that my bullet hit the plane, but nothing happens. other times the bullet fired upon me goes by me, and then when it clears my plane i lose a life. otherwise, this is a really fun homebrew and i have enjoyed playing it.