Currently I’m working on a translation patch for Space Squash.
I’m nowhere near done, but I was wondering if anyone would be interested in having a patch for this game?

Later on I’m thinking of translating Insmouse no Yakata, Virtual Fishing and V-Tetris (is there any Japanese text in this game at all?).

Here’s one screen (the translation is not finalized):

uh yeah, cool news. 😀
there’s definitely interest in translation patches. i think there was a thread about a space squash translation here before.
an insmouse patch would be nice too and especially one for virtual fishing would make the game much more playable. but i don’t remember ever seeing any japanese text in v-tetris.

Ah, I saw that thread, but I don’t think translation patches were mentioned. Still it was very nice of him to translate that! :thumpup:

If you don’t remember any j-text in V-Tetris either, then there is no need to translate that game.

I’m going to release the incomplete translation patch of Space Squash,
which can be downloaded here.

Not yet translated:
Intro (which is like 5 sentences long)
Character names
The picture of the control pad

Everything else should be translated, but I could easily have missed a couple of random lines. The formatting could be improved. I didn’t look beyond Area A, since there is no way (that I know of) to quick jump to a level.

is this a special format ips patch or something? when applied to my space squash rom, i get a 1,74 mb file, which doesn’t boot in red dragon…

I created the ips patch with Lunar IPS (v1.00). I don’t know if there’s anything special about that program.

I hope that helps!

Edit:
I missed a couple of lines in the training area, so I fixed them.

I think the problem is that you’ve got the wrong original ROM… the actual ROM was only 512k, but there’s a 2MB ROM floating around that has the 512k ROM duplicated 4 times (works fine, but redundant).

that must be it. check your pms, feel.

Thanks!! I thought it was weird that the same text appeared 4 times, now I know why. I’m currently trying to locate the few missing lines, which seem to be stored in a different way…

Sorry for double posting, I couldn’t find the edit button. I’ve had no luck in finding the missing lines for Space Squash, but I did manage to change some text in Virtual Fishing (1 MB).

The font, which is from the game itself, is quite ugly.

He says something along the lines of “I will explain the rules before the tournament begins”, which had to be shortened beacuse of limited character space.

Triple posting!
I fixed the Space Squash patch so it *should* now work on the correct rom dump.

When I play Virtual Fishing on the emulator I seem to get longer conversations than when I play it on the real hardware. Also some of the text is messed up.

now all we need is a dump of SD:G and a translation patch 🙂

The work with Virtual Fishing is going along well.
Here’s an unfinished screen:

That’s really cool… but yeah, what’s with that font? 😛

should i post that beta space squash patch on the site or wait for the final version?

how do you apply these patches ?

You can post the beta, I think it’s going take awhile before I can locate the missing lines. When you post the patch, do you think you could edit out my links to the IPS patch because I will be taking them offline. Thanks!

To apply the IPS patch you need a free patching utility like LunarIPS, which easily can be found by using Google. You also need the correct rom dump of Space Squash.

check the bottom right of your post, you should be able to edit them yourself. ^_^

I can’t see it! I can see Reply, Report and an arrow pointing up. I saw Edit right after I posted, but now it’s gone. Maybe I’m just blind or something. 😛

Nice that you posted it! :thumpup:

I just saw a typo, it should “believe” not “beleive”, lol! It’ll be corrected whenever the next version is released. Everyone, please feel free to point out typos, missing words, bad grammar, lines out of place etc. There shouldn’t be a lot of them, but you never know.

oh yeah, posts can only be edited up to an hour later, totally forgot, sorry. so i deleted all the links for you.

Thanks to my brother Greg, who is a computer programmer unlike me, the English version of the Space Squash ROM has been updated and is attached to this post. Greg primarily used the patch created before by Feel to create the new English-patched ROM. Nevertheless, because this was the first that he had ever dealt with any sort of programming for the Virtual Boy, it took a lot of trial and error on his part as well as testing and re-testing on my part to get the game to a satisfactory state. It does seem that it is finally where we would like it to be for now. Updates to this version include:

*All previous in-game translations now more accurately convey the meaning of the original Japanese information. Unfortunately, character space limitations from the original Japanese ROM were not changed in any way, so this often resulted in some information, usually the least important, having to be omitted since the English language takes up more space.
*The information on the Bonus Stage’s Victory and Defeat screens, which was not translated at all before, has now been translated.
*The spelling error that would result on the word “Speed” on the VS screen if one would go back to it after viewing “Shield” has been corrected.

Unfortunately, the Controls screen which appears before the Practice mode begins, the Introduction Story which appears at the start of the main game, and the character names which appear on the VS screens still haven’t been translated, so one must still view the thread of my Preliminary English Translations for Space Squash if one wants to see the translations for these. These three areas of the game will require more work to alter the special characters, which will require some more learning on the part of my brother. It does seem, though, that he is enjoying learning more about programming for the Virtual Boy, so these may be able to be changed by him in the future. He has even said that he hopes to start working on a homebrew game of his own for the Virtual Boy, so it was good that I persuaded him to do this update for me and all of us. 🙂 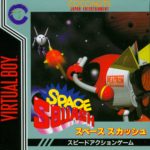