The otherwise sturdy Virtual Box stand has one weak link, which is the little plastic medallion that connects the two metal legs and the clamp to mount the Virtual Boy to. Some of you have probably already experienced it breaking – I have at least. A broken medallion often renders the whole stand useless, which until recently was a problem since it was not that easy to get a replacement.

For a while now this has not been a big issue anymore, since Planet Virtual Boy member Hedgetrimmer from the UK has created the “Stand Fix kit”, which consists of a grey CNC milled solid piece of plastic that replaces the aforementioned medallion on the Virtual Boy stand and comes with all relevant screws, washers and nuts.

The kit is a direct replacement and works just like the original medallion, there’s no noticable functional difference except that the replacement medallion is much more stable than the original one; I don’t see any chance of this thing ever breaking. Also, please note that the pictured review copy is from the first batch and newer pieces have a nice red color etched “Neartendo” logo on the front (last image). My conclusion: Definitely recommended!

A kit is 7 GBP (about 11 USD or 9 Euro) plus shipping and can be ordered in the Marketplace. 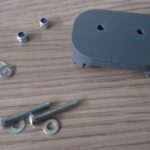 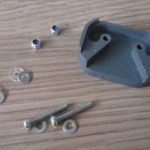 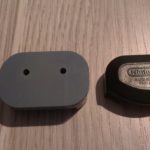 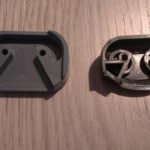 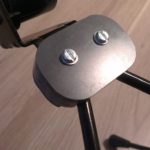 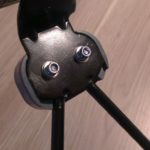 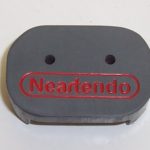 Thanks for the nice review Chris.
The ones I have sold seem to be working out for folks, it pleases me to know maybe some forgotten VB’s can get a bit of love now.

I might look foolish for asking, but I have to: What is the explanation behind “Neartendo”?

Probably because “Nintendo” is a trademark of, well, Nintendo. Though if my stand ever breaks I’d appreciate it if the reproduction was a perfect copy of the original, so it would look more authentic.

Yeah thats the only reason, its nearly a Nintendo item, just a naff play on wording.

A perfect repro could be made, but couldn’t be machined as its copying a molded part etc, but I guess outer faces could be the same but that requires turning the product over to machine the other side, meaning the line up has to be bang on to make it work, not very feasible with our set up.

A quality 3D print could do it, but they are expensive compared to finding another stand.

Its a personal thing about the looks, I get that some folks want an identical copy but these are a basic simple shape to try and keep costs down.
Fit for function, which personally I think is all that matters in a repair.

If you did want to get yourself a 3D print of the original I do have it modeled and I’m happy to let anyone have a copy to get printed, just PM me.

Yeah, the play on words was, indeed, my best guess as to why it was written as “Neartendo.” I just wasn’t sure if there was any more significance behind it or not. I like it. :thumpup:

Just a thanks to
http://www.retrocollect.com/
for picking up this thread as I got a sale through it.
Look like a cool site, check out the link above.

I picked up a trio of these medallion fixes and am very pleased. I personally like the chunkiness, color, and aftermarket “Neartendo” logo. The gray and red of the medallion compliments the gray and red buttons on the VB controller – especially when on my Japanese demo stand.

Sure the factory medallions may appear “sleeker” and will work for a while, but the quality is lacking and they are small and insufficient (please no “that’s what she said” references). 😛

The replacement medallions, on the other hand, are slightly larger, high quality, solid, and I hear they also add 10 horsepower! >:-D

Thanks to all who have bought a kit, I have now sold out of the current batch so need to get more made.
Could be a few weeks but I will keep a list if anyone PM’s me and we can sort payment etc once the new batch is ready.

great job :thumpup: ! if broken mine I tell you for buy one
saludos!

I am from the first users of this medallion,without “logo” (i like it w/o)
Nice item,it is fit perfect.

I just noticed that the English text says “Virtual Box” instead of “Virtual Boy”. Would be a cool title for a game though.

thunderstruck wrote:
I just noticed that the English text says “Virtual Box” instead of “Virtual Boy”. Would be a cool title for a game though.

Ah now it looks like its wrong but an old internal Nintendo memo was found written by Gunpei where he calls his great invention the Virtual Box, but the big N decided to rename that last bit Boy to bring it in line with the Gameboy, a popular fad at the time….. 😀

Looks like there’s another original version of the medallion, perhaps this other one isn’t as prone to breaking?

So if doing the 3D-print (metal is sometimes available too) perhaps a solid shape as possible will hold up better?

So Nintendo has revised the medallion on later models? Interesting find! Everybody check their stand medallions! 🙂

Interesting, I wonder when they changed it, more internal webs should add strength, anyone got a cracked one of the newer type?

I just checked my stand as my VirtualBoy has a rather high number (VN1055…) and it indeed has the newer version of the medallion. Amazing.

Just got my kit in the mail, thank you Hedgetrimmer!