It was a blast to develop for. I miss that machine a lot. You had to load 4
frame buffers up every game tick.

We used a standard “C” compiler, but we made our own object oriented system
up to kind of act like C++.

The dev kit was a white box that hooked to the PC with a Virtual Boy hooked
to the white box, then after every compile you’d stick your head into the
Virtual Boy and see if your code worked. We originally were going to have a
head to head Water World game that would’ve been connected via serial cable,
but Nintendo decided not to release the cable..Bummer…It would’ve been so
cool to play head to head against a friend.
Oh & no, there never was 2 player prototype on WaterWorld.” 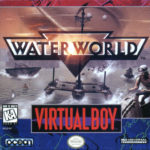