Banda Virtual has released a new pseudo Virtual Boy homebrew mini game. That is, a Game Boy game made in GB Studio that has then been wrapped in Game Boy Emulator to create a VB ROM of it; this time using the whitelabel patch to make it look closer to a native homebrew. “Super Jump” is a simple game with a certain Flappy Bird vibe to it. You play as Mario and jump over a series of increasingly difficult obstacles.

I love how quickly that patch was utilized! 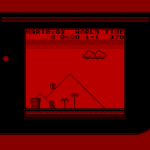