Since Dan is very busy working on it, I’ll tell everyone about his 3D engine project.

He found a 3D engine for the GBA (and other mobile, low powered systems) called Yeti3D.

He has made considerable alterations to it, and there are many more to come. This Page is a sort of visual history of it’s development, in reverse chronological order.

Things still to do:
1. Make it 3-D (as opposed to merely 3D)*
2. Increase Speed
3. Add features (and replace features taken out during conversion, such as lights.)
4. etc.

This could make for some very cool games, if certain issues can be worked out! Keep up the good work, Dan! 😉

wow, thats pretty amazing, i just found this site and wanted to get in on all the vb stuff, i have done just some enhancements to my vb to the outside. hopefully i can post a pic of it.

just visit our channel on irc, to get further informations about vb developement and stuff:

irc, efnet, #virtualboy , or use the script on the pvb startpage

Dan has re-enabled lighting and, along with the new screen-shots, he seems to cryptically allude to a speedup… Go check it out, now!!! (The link is in the first post of this thread.)

wicked. it’d be sw33t to see a quality FPS produced with this engine… Quake Lite, anyone? 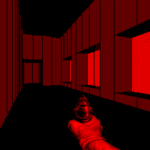