After nearly 3 years of development, Jorgeche hereby finally releases his long awaited VBJaEngine, a sprite and scroll engine written around the Virtual Boy’s graphical architecture. From the documentation:

“The VBJaEngine has been developed to fill the gap between the developer’s game logic and the hardware management required to produce visual and audio results on the Nintendo Virtual Boy. The engine is a sprite based engine, which takes care of all the work necessary to display user defined sprite images on screen, allocating graphical and CPU’s memory to hold the definitions of such images.”

The documentation is included in the release, but you can also find an always up-to-date version in the Development Wiki.

In addition to the engine itself, Jorgeche also releases the complete, documented source code of his Mario demo, which is based on the engine and will be a great sample for everyone who is interested in working with it!

Please note, that you need the latest gccVB compiler (GCC 2.95) to compile the engine. Also, you’ll have to set up an environment variable in Cygwin (not Windows!). To do so, execute the following command (replace the path with the one to your engine folder):
export VBJAENGINE=/cygdrive/c/cygwin/home/Chris/engine/vbjaengine
If you don’t want to type this every time you start up Cygwin, you can add that line to the file “.bash_profile” in your home folder.

WOOT! Can’t wait to get my teeth into this one! 😉

BTW, under XP at least (and probably Win9x, no idea about Vista) you can make a VBJAENGINE environment variable in Windows (System control panel, Advanced tab, “Environment Variables” button) and the Cygwin shell will automatically pick it up. You don’t even have to reboot.

Thanks RunnerPack, about the tip, it didn’t work for me the Windows environment variable when I tried it so that’s why I suggested the CygWin but it could be because I’ve always worked on Linux and don’t really know much about Windows.

I would like to retake the level editor we once talked about if you have interest on developing it, since it would really make a difference for the engine appeal.

hello,i only could said :thanks.
I am new on virtual boy world,and one of the demos/games most liked me in first time was your mario demo.(it is true,i was searching info because i read about an emulator which emulate virtual boy and i wanted test it,here in europe this never arrived.)
Now ,after test all demos,and some game ,it goes on being one of the most interesting.
would you going to do more levels? Maybe if the map editor is done,it would be easy for non expert as me.

cualquiercosa327, I’m not really interested in continue developing the game itself, mainly because it’s more about creating the assets (graphics, sounds, levels, etc) which is not what I like; instead I plan to continue adding some features that the engine is missing right now like particle effects (this is at the top of my list), then I want to add more affine effects (and fix the rotation), I’m thinking about tile based collision detections and polygons too, and maybe even implement communication if some day I decide to buy a second VB.

The level editor would be great, but I will need help from other people to get that working because I’m not a Windows developer (and I’m not interested in learning it either). But it will never be a replacement for programming skills, the real objective of the editor will be to create graphical objects and place them into a stage, once that’s done, you have to go to code how each object must behave.

I understand it.
Why dont use a level editor which is done and create the pluggin??
As example tile studio (http://tilestudio.sourceforge.net/ )
is a great program,or maybe mappy (http://www.tilemap.co.uk/mappy.php)
both can export to several plataform,which is very interesting.
maybe add support to some of them (or other) and add support you engine.

thanks for your great job

before i talk about tiled and other,but what about vibe and its map editor??
Some one here has used it?

Those tools look interesting… but would need some test to see if they are of any use for my engine since it is not based on tiles. I decided to make something with a more general purpose usage than solely being useful to create platformers, so, an editor for my engine will have to be a little more specific and tied to my design. Obviously a tile engine will make a lot easier to develop platform games and even make room for more complex games of such kind, but I doubt there will ever be that much effort to develop a homebrew game for the VB with commercial quality standards, so I decided to make something which allows other people develop quick games of whatever kind they want, I think my engine can handle most of the released games except for those polygon based games like Red Alarm, and that was the reason to develop Mario VB as a showcase of my engine’s capabilities.

About vibe… I assume you’re talking about VIDE and the map editor plug-in recently released; it is a great tool, I’ve been using it for all my work in Mario VB… but I think that there is a lot of room to make something which can make faster the process of creating content for the engine, that’s why a custom tool would be great… or maybe to exted VIDE’s capabilities to support my engine with a plugin or something, but as I said, it would be necessary the effort of other people since I’m not a Windows programmer and I’m not interested in doing so. 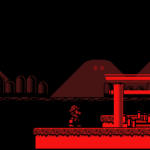