VUE-MASTER (read: “View Master”) is a take on the classic toy stereo image viewer. It’s a Virtual Boy stereo viewer by Stereo Boy and KR155E, containing 7 stereo images. First and foremost, though, it is meant as a VBDE/VUEngine template which allows anyone to compile their own stereo images into a ROM to view on real Virtual Boy hardware, without any programming knowledge. The sources, included with the soon to be released new VBDE version, will allow anyone to easily create their own reels.

Check it out on the forums. 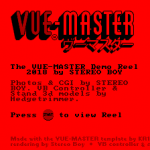