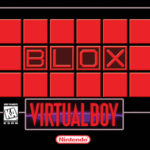 BLOX is a clone of Sokoban, a puzzle game where you have to push all boxes in a level onto a goal field. It features 3 difficulty levels with 60 puzzles in total, plus two unlockable bonus stages, passwords and simple sounds and more.