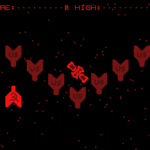 In Soviet Union 2010, you control a space ship that’s equipped with a cannon. Your mission is to destroy as many USA-serving ships as possible, and get out alive while getting as many points as possible.

The game was created for the Planet Virtual Boy Coding Competition 2010, which ran from May 1 to November 1, 2010. It won the fourth place, but was only 1 vote short of third place.

The story: Some scientists from Vladivostok have invented a time machine and used it to go to back to the 1960s, the time of the Space Race between the USSR and USA. It worked, but on return to 2010, a malfunction sent them to a parallel universe where the Cold War is still going on. You’re one of the members of the Red Army. Save the scientists!

Soviet Union 2010 has also been released for DOS and PC-FX.