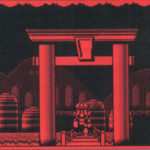 A self-running 1-level Mario demo that was shown on Winter CES in 1995, where it could be viewed alongside a number of other Virtual Boy demos in a darkened room on big screens using special 3D specs to achieve a 3D effect similar to the Virtual Boy’s.

The demo resembles the first Super Mario Bros. on the NES, as it features a similar level structure and even has a small castle and a flagpole at the end. The short level consists of two layers, between which Mario switches back and forth using bridges or pipes. Another segment shows a top-down, Zelda-like room, in which Mario soon breaks through the floor and falls down the dark pit, which must’ve looked impressive in 3D.

Contents of this demo eventually materialized in form of two Virtual Boy titles, namely Mario Clash which seemlingly adapted some graphics like Mario’s sprites, and VB Wario Land, which makes use of the concept of changing between foreground and background layers.