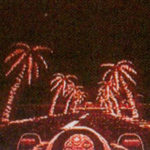 This is a 3D driving demo shown from a first person perspective with great 3D utilization where the road signs and palm trees whizzed by like you were really there. It reminds of an early Super Monaco GP-like driving game.