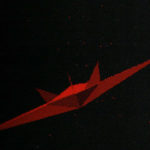 An intriguing technical demo featuring a Starfox-like spacecraft doing a lot of spinning and zooming in 3D. It’s made of filled polygons and looks much better than the unfilled Red Alarm vehicles.