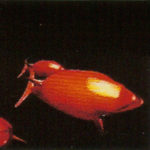 This technical demo for Nintendo Virtual Boy, also known as the “Dolpin Demo”, picks up a theme which was also used in tech demos for other Nintendo systems: a scene showing dolphins and water effects.

A few dolphins are swimming on their sides, and water is shown as if you are looking at a side view of rippling water within a transparent bathtub. It is also showing a 3D beach scene where the water looks like it is coming in from the horizon and in another segment a few dolphins jump out of the ocean into the face of the viewer.