Here is a playable version of a mockup screenshot I released earlier this year. The mocked game is now called “Null Pointer”.

This is only a single small room to walk around in, built using the VBJaEngine. It was a test for a few design ideas I had, most notably a parallax scrolling based pseudo 3-D technique for which I am still looking for a cool name. 😉 Please also note the few showcased engine features like the particle system!

Besides the normal ROM, I have attached the full source code and a debug build which has the VBJaEngine’s extensive debugging tools enabled:

The source is meant to be compiled with VBDE. Hopefully I can release beta versions of both VBDE and the bundled VBJaEngine soon so you can play around with it if you like. 🙂

Ditto on what L_E_T said, plus it’s great to see the source and check out the VBJaEngine syntax ahead of time. Loving the parallax scrolling, BTW. It really shows how much a stereoscopic display can add to a game’s visual design.

The animation of the character is great, too. The only thing I’d add is the torso bobbing up and down a bit while walking.

Cool stuff. Need to check it out later.

This is definitely the start of something really cool. I especially like the look of the doorways as you run.

The screen shots look great, I’ll be giving this ago at some point tomorrow.

Thanks for your comments!

RunnerPack wrote:
The animation of the character is great, too. The only thing I’d add is the torso bobbing up and down a bit while walking.

Yeah, that’d look better! I am happy that I could get something done that looks OKish at all. I couldn’t even get the arms right, so I let those out completely. But hey, it’s a robot, it can somehow keep balance without using its arms. 😉 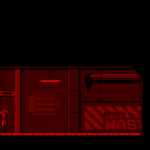