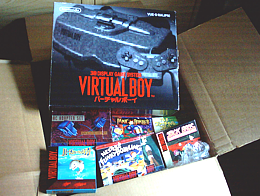 A big package with lots of cool Virtual Boy goodies arrived here yesterday, it contained a rare Japanese demo VB (aka Mosaic Box VB) for example. The unit was once delivered to Japanese stores with Nintendo’s small shop front displays, and differs to the “normal” Japanese VBs for example in the box, which shows a grey, pixelated VB. I put up a site about the small Japanese store displays mentioned above, and updated my collection. When I am not too lazy, I will also scan in the “mosaic” box and manual soon. Oh, and thanks to Neil for the package. 😀

“Better late than never” should be the titel for the next point. I finally upped a small report about the first meeting of DrAetzn and me, which happened to be in early May. We called it “PVB Meeting #1”, although “Zelda Meeting” would probably be the better title for it, but read for yourselves. 😉

Next, I have written three new reviews of Red Alarm, Mario Clash and Virtual Pong! You now also have the chance to leave your own ratings for each game.

Freeze now sent us scans of the strange ad of the swedish band Randy. A very short article about it can be found here.