I have found an image of a Shin Nihon Pro Wrestling Gekitou Densetsu leaflet on Twitter, posted by someone who has worked for various game magazines for about 10 years as a freelancer in the past. Presumably, judgind by the context of the tweet, this was handed out to the Japanese game press at Nintendo Space World ’95.

It doesn’t look spectacular, but contains, besides some generic information about the game, a list of all 8 featured wrestlers, as well as in-game sprites of three of them.

I have quickly OCR’d and machine translated the leaflet, click the image below to view. 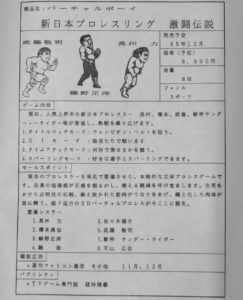 “The true sense of presence draws the five senses and awakens the burning fighting spirit.”

This is a truly awesome find!

Great find. Hope a prototype of the game Will see the light someday 🙂

Agreed that is a great find and if that date were to hold true odds are somewhere something playable exists. Add that to the mental note of try me with dragon hopper if they’re ever found.